As the wind picked up and the rain became a spitting mist, nothing could keep the smiles off of everyone’s face or wane the excitement that buzzed around the Biogen campus in Weston, Massachusetts as electric vehicles and bicycles arrived for the kick-off event for MASS DRIVE CLEAN’s third annual event season.

“THE ONLY SOURCE OF KNOWLEDGE IS EXPERIENCE”

Before the event started at 10 AM, a line was already forming at the outdoor registration table. Friends and colleagues chatted amongst themselves as to which vehicle they would test drive first. Eager eyes scanned over the waiting vehicles which included BMW, Ford, Mercedes-Benz, Porsche, Toyota, Tesla, and Volvo.

Participants expressed an interest in several vehicles, often test driving more than one. Each vehicle never sat longer than five minutes. There were also a handful of people who simply came out to test ride the electric bicycles.

Even after 30 EV test drive events in the New England area, such as Biogen, I am still in awe by the excitement that they generate. My favorite part, without fail, is listening to participants talk about EVs while they wait, stating how they likely would not purchase one, and then talking to them after they get back from their test drive.

Most people come back and tell me how they are now actually thinking about purchasing/leasing either an EV or plug-in hybrid electric vehicle (PHEV) as their next car. Participants leave this experience with a story to tell their co-workers, family, and friends which helps lead to a broader understanding of EVs

It’s amazing to see almost one hundred people come out on their lunch breaks or between meetings on a cold, wet spring day to test drive a vehicle that they may not have previously cared about.

ON THE ROAD TO CLEAN AIR 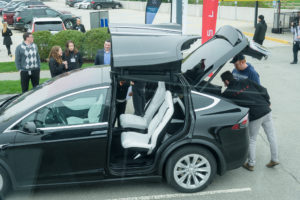 This initiative is an educational engagement campaign to introduce the Bay State to this new and exciting technology while building on its commitment of reaching a roadmap goal of 300,000 zero emission vehicles (ZEV) as stated in the 2013 signed ZEV MOU.

As the third year officially begins for MASS DRIVE CLEAN, I am looking forward to hitting new benchmarks by creating unforgettable experiences for every participant, dealership, and host we work with. If you attend one of our many events, look for me, I will be the one smiling, ready to hear your thoughts on driving electric.